Day 4 rolled in with warmth and sunshine… Warmth?! Sunshine?! Yes, finally! Unfortunately, it was not all “sunshine” as two of our campers from out of town had to leave camp early. However, this beautiful summer’s day was just in time for the concept of the day, “Sun,” and its role in both art and science. The science portion of the day as it related to the concept was fairly self-explanatory (plants need sun!!), but the lesson started with a nice juxtaposition in the mushroom forest which is located in a lush ravine down from a north-facing slope (an environment that depends on much less sun than the next portion in the garden!). 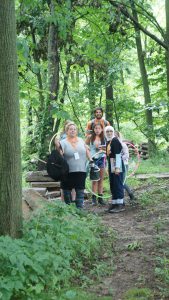 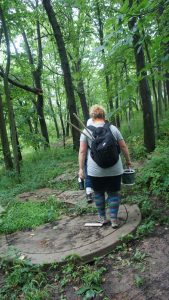 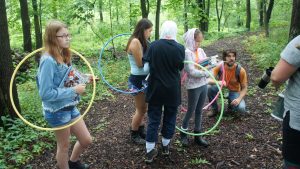 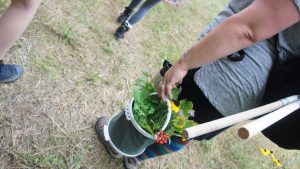 Here, I walked the campers through the Mushroom Forest explaining how certain organisms have different requirements to survive. Fungi are one of the greatest examples, as many thrive in shaded places. We discussed wild versus cultivated farm products, the “wild” mushroom a much more familiar concept than the cultivated type that needs to be inoculated into logs. And this was where the fascination began. Stacked like log cabins or long teepees, our mushroom forest always intrigues visitors. The little fruiting bodies of shiitake mushrooms growing out of the logs are like little treasures when discovered, and the campers spent time investigating the many logs in the forest. The fun was short lived, however, as it turns out that mosquitoes like the shaded woodlands as much as the mushrooms. Therefore, we took refuge in the big open space of our organic garden, picking up plant specimens as we went along to be used in the afternoon Sun Printing session. The garden task: plant transects. It is easy to look at a space and say, “Look, there is grass,” or “There are flowers,” but it is much more illuminating to cordon off a section of wild space and look thoroughly, counting each and every new species and determining the makeup of the overall area. We used hula hoops to create our transects, and Jen led a riveting lesson in various plants then segueing to the animals inhabiting the same space: invertebrates! 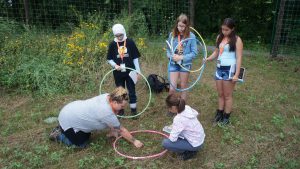 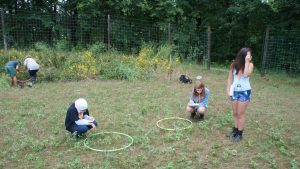 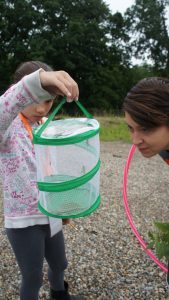 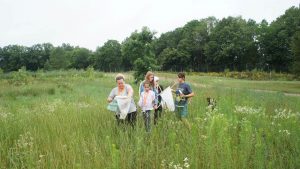 Jen had been excited all week to delve into her specialty, and she finally had her chance. She explained the simultaneous evolution of plants and insects, allowing the campers to draw their own conclusions as to why such a coincidence would occur. The Garden portion ended with a morning harvest of raspberries, currants, and ground cherries that the campers gathered up for snacks and returned to the Pasture Barn. 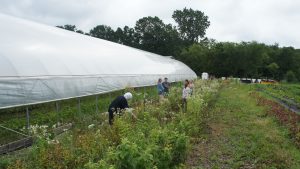 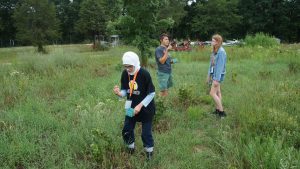 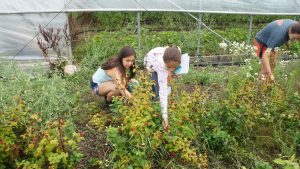 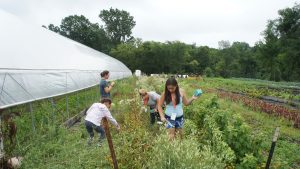 The next activity was the final step of Sun Printing! The cyanotype photo paper had sat for two days, and it was time to put it to good use. After Jen and the campers put some of their specimens into plant presses and sketched or painted others, the remainder of the specimens was used for Sun Printing. Naomi donated a box of old antique keys and other metal items, and the group set to work laying out designs of soft-edged plant specimens alongside industrial metal products, the contrast quite striking. We set them out in the sun (yes, the sun stuck around!!), and 15-20 minutes later, each camper returned to their works of art, removed the items from the prints, and want to wash their prints in the sink (the final step in the sun-printing process!). 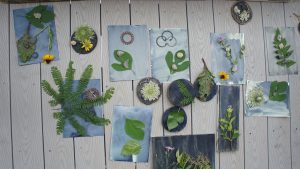 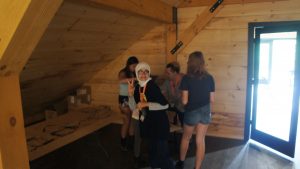 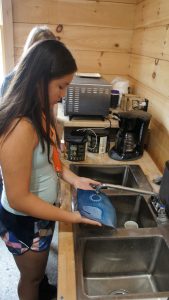 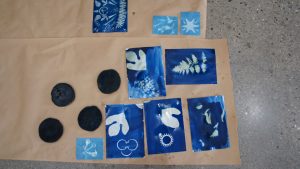 What beauty awaited! Even though the ambitious “wood canvas” prints didn’t work out as planned, the homemade cyanotype paper worked marvelously. And the campers were proud of their creations, many of them crowding around one another’s works of art with words of admiration. These prints would be highlights of the outdoor art gallery the following day.
The remainder of the afternoon was devoted to art. Watercolor painting was introduced, a few students really taking to the medium, while others pursued acrylics, mastering the fine art in botanical splendor. Campers went to task on their various half-started projects from nearly a week’s worth of artistic exploration, followed by a golf cart ride around the pasture loop giving the campers an opportunity to envision what their final project, the “Goldsworthy” sculpture, might look like and where it would best fit in that outdoor space. Campers were filled with ideas, and Jen encouraged them to sketch or brainstorm those ideas in preparation for tomorrow’s sculpture building morning and the culminating Outdoor Art Gallery Open House. The last activity of the day was a long awaited art critique of a single piece of art from each camper and counselor. 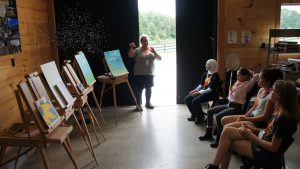 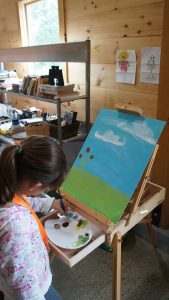 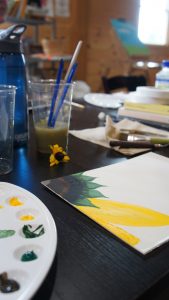 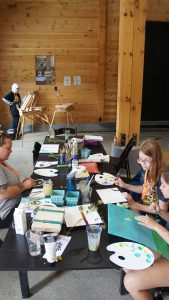 About the Author: Robin Hills Farm

Robin Hills Farm is a place for education and family-fun events, a place filled with fresh and healthy vegetables from our garden, a place to tap into sustainable design and living, and a place to commune with nature and enjoy the beautiful landscape and recreation spaces that abound!