Wednesday’s morning mimicked Tuesday’s, grey and damp, the air thick and hot. The proposed agenda was a morning full of science, then wrapping up the afternoon with a peaceful art session, but on this particular day the weather was against us, forcing us to adjust the agenda while conveniently dovetailing the theme of the day: water.
With storms brewing outside, the morning was spent in the cool shade of the Pasture Barn for an introduction on color. As Jen introduced color study, complementary colors, and color shading, flashing famous rainbow art masterpieces across the screen, the sleepy-eyed students began to awaken, eager to experiment with their own color theory. As the lecture wrapped up, we sprawled out to our areas of choice throughout the barn, some choosing to stand at the easels and others at the table, for our first attempt at painting with just, dare we mention it, one color.
Each student carefully selected their subject of choice from a set of animal skulls of varying species and sizes, and took their respective positions for their first attempt with acrylic paint. The lesson emphasized shading with acrylic paint, and challenged students to squint their eyes at their subject to notice areas of dark and light in the piece, then translate that vision to a single color scale. Several hours of concentration, silence, and inquisitive minds later, the animal skull paintings began to take shape, and we were all feeling humbled by the difficulty of monochromatic painting coupled with the challenging and overwhelmingly detailed animal skulls. 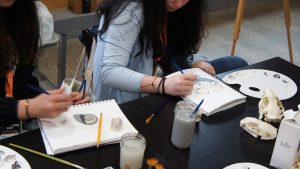 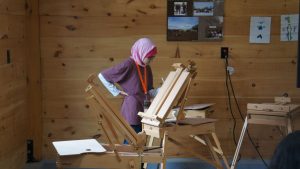 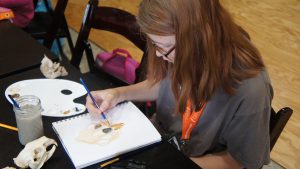 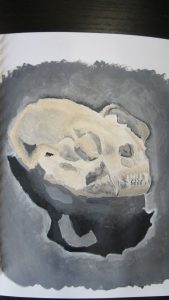 A much needed stretching and concentration break naturally took shape, and soon the campers were gathered together playing multiple rounds of the infamous game, telephone. Everyone was officially awake and ready for some science, but the skies chose to dictate otherwise.

WHOOSH, WHIPPP, WHAM. Rain thrashed in through the tall barn doors, which we’d flung wide open to receive what little greyish light we could, as thunder shook the ground. The campers all shrieked and squealed as the surprise downpour soaked not just them, but threatened to ruin their hours of hard work of painting.
Ben sprang to the rescue, leaping up and using all his might to close the Pasture Barn floodgates while campers simultaneously scrambled for the paintings, until we were all safely inside once again, startled and giggling. Somehow, this storm brought a new, higher energy to the day, and despite the drizzle outside, we were eager to begin our very appropriately chosen science lesson about water.

We marched out to the stream, dip nets in tow, to dredge for bugs, snails, and crustaceans. Much time was spent at the variety of wetland habitats that span the farm, the campers sampling from streams and ponds and collecting the sludge in containers for further observation indoors. Most notably, Jen found a rock peppered with caddisfly homes built from shells, rocks and grit. Honorable mention went to Ben for catching an uncooperative frog that got some unwelcome pats on the head, then was let loose to hop back with his frog friends. 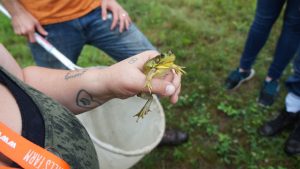 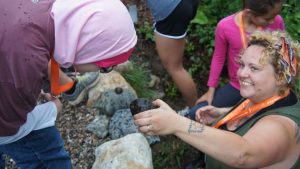 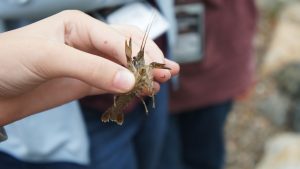 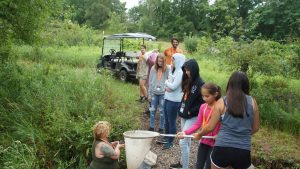 Now muddy and wet from the continuous drizzle, we caravanned back to the Pasture Barn, which again served as a dry sanctuary for observing the newly foraged creatures under microscopes. Campers exchanged “ooohs” and “ahhhs” over the level of detail of their creatures from their seemingly superhuman eyes thanks to the microscopes. 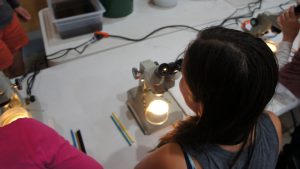 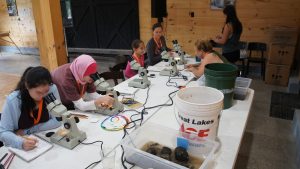 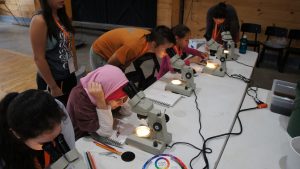 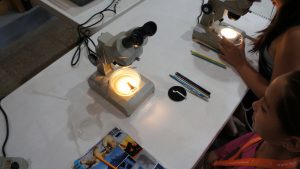 Sticking with the color theme from the morning, campers carefully chose 5 colored pencils, a new medium, to translate what they saw under the scopes to their sketchbook, again focusing on color, shading, and shadows. 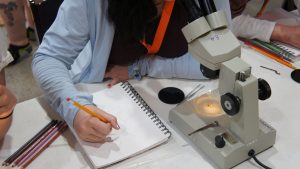 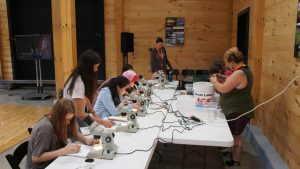 We got lost in the minute detail of the creatures and before we knew it, the day was winding down to the last hour. With the weather finally cooperating, we marched up to the farm’s greenhouse to tie together the lessons of the day.

The greenhouse is home to Robin Hill’s aquaponics system: a closed-loop system combining aquaculture, the practice of raising fish, and hydroponics, the practice of growing plants in water. Upon walking through its steamy glass doors, we were immediately smacked with a thick wave of 102F heat, only adding to the chaos of the day. A few of the campers promptly wanted to turn around to avoid the heat and humidity, but all were simultaneously drawn into the long raised beds, bubbling with cool water and rich with butterhead and romaine lettuce.
Scientific curiosity prevailed, and we delved into the lesson, exploring the aquaponics system’s harmony between waste and food—specifically, how the fish waste, with the help of various microorganisms, converts into the ideal food for plants to grow, further underscoring the water and cost savings associated with these innovative systems. After examining and discussing all parts of the aquaponic setup, the clock had struck near four and it was time to go home. 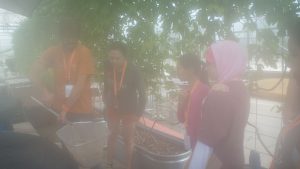 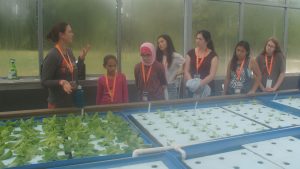 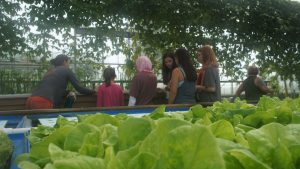 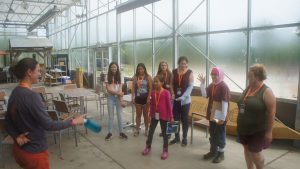 Now sweating, sticky and still damp from the day’s events, the campers headed home, already asking about tomorrow’s theme of sun, plants, and fungi, yet happy to conclude the theme of the day, water, with a shower in their own home.

About the Author: Robin Hills Farm

Robin Hills Farm is a place for education and family-fun events, a place filled with fresh and healthy vegetables from our garden, a place to tap into sustainable design and living, and a place to commune with nature and enjoy the beautiful landscape and recreation spaces that abound!